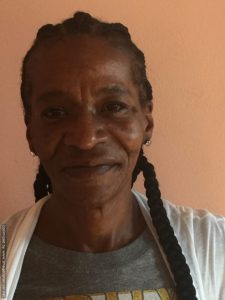 Lyntoi has a lot to celebrate: 16 months of sobriety, and a new full-time job. Lyntoi, 57, has worked hard to get where she is today. A native Chicagoan, she grew up in a close-knit, loving family on the West Side. Her father was a pastor and a singer and her mother stayed at home and raised Lyntoi and her brother. “We didn’t know we were poor,” Lyntoi remembers. “We always ate, always had nice clothes to go to school in. My mother made sure we did our homework.”

Life changed when Lyntoi turned 9 and her mother took a nighttime job. A cousin babysat Lyntoi and her brother. After putting her brother to bed, her cousin sexually molested Lyntoi. “I fought every time, but he was a big boy so I always lost that fight,” says Lyntoi. He warned her not to tell anyone and gave her alcohol to stop her from fighting him. That’s when her addiction began.

“I didn’t know that it wasn’t my fault,” says Lyntoi. “I was so scared and the alcohol made me feel good.”

Lyntoi suffered from alcohol addiction and turned to other drugs over the next 30 years. At times, she worked as a stripper and as a prostitute to support herself. “I became homeless because I was ashamed to go home,” Lyntoi says. “I would rather sleep in a park or under a bridge or in an abandoned building, bitten by rats, than to go back the beautiful building I grew up in.”

In 2010, realizing things had to change, she entered rehabilitation at Haymarket Addiction Treatment Center, and remained clean and sober until 2015. The stress of caring for her 94-year-old mother, who suffered from Alzheimer’s disease, led her to begin drinking again. She also started using heroin. Following her mother’s death, Lyntoi returned to Haymarket, where she stayed for six months.

She then entered St. Martin De Porres House of Hope, looking for structure and a foundation. “Sobriety is very hard, Lyntoi said. “You have to work steps, to follow rules. I had to learn how to live.”

In addition to alcohol and drug counseling, Lyntoi underwent therapy for the first time. “I thought therapy was for crazy people. It’s ironic how we label things. I never knew how to ask for help. St. Martin’s was the first time I dealt with what happened to me as a child. I never even said the word  ‘molested.’ I heard people talking about it, but thought that wasn’t me, because I was in denial. I was in so much pain and didn’t know what that came from. I suppressed those feelings, but through having a therapist I was able to dig down deep and find out why I kept abusing myself and blaming myself.”

At St. Martin’s, Lyntoi says “I know I always have somewhere safe to come. I can ring a doorbell and get in.” She is grateful to her therapist Sister Carlotta, recovery coach Amanda Longe-Asque, and Executive Director Yaisa Hagood. “Before, I could be around a lot of people, but I always felt invisible,” she says, adding “I feel safe and wanted here. They know who I am.”

In addition to completing St. Martin De Porres program, earlier this month Lyntoi graduated from a 14-week job training program at Growing Home, working as production assistant at the nonprofit organic urban farm. At Growing Home, she discovered her love for cooking. She worked there Monday through Wednesday, and as a prep cook at Kitsch-Fix, an organic food delivery service, on Thursdays and Fridays.

On mornings when Lyntoi cooks breakfast for the women and children at House of Hope, she gets up at 4:00 a.m. for prayer and meditation and is in the kitchen in an apron and a hairnet by 5:00 a.m. before heading out to work at 6:30.

On Wednesday, July 19, Lyntoi began full-time, permanent employment at Shake Shack. She will remain at St. Martin’s as she continues to build her bright future. “I didn’t grow up wanting to be an alcoholic and an addict. I wanted to be a surgical nurse. Those goals are attainable now. I will go back to school and have my own place. In the meantime, I need to work and build a foundation along with my recovery.”