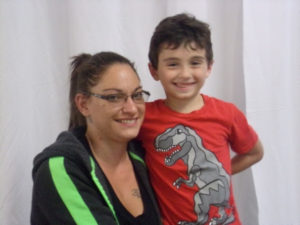 Amanda’s addiction began shortly after her son’s birth by C-section. Braiden’s father, who had an addiction to painkillers, took the medication that had been prescribed for Amanda and offered her heroin as a substitute. It didn’t take long for Amanda to get hooked. “You try it once, you like it a lot so you want to do it again,” Amanda says. “Sooner or later you pass the three-day marker, and you become physically sick without it.”

Amanda got help through an inpatient treatment center in Rockford. After one month of treatment, she stayed sober for 18 months. Then, when she turned 26 and was no longer eligible for her mother’s health insurance plan, her medications for her co-occurring conditions immediately ceased. Amanda relapsed, stealing baby formula to sell to support her habit. She was arrested multiple times in 2015 and 2016 for retail theft, and ended up in Cook County jail.

Amanda grew up in her grandparents’ home in a Chicago suburb, which she describes as “just a normal neighborhood. We’d run around, and be back home when street lights came on.” A graduate of the class of 2006, Amanda participated in high school cheerleading and gymnastics, performing at the All American Half Time Shows at the Capital One Bowl and the Citrus Bowl.  She enrolled in college in 2008 to study criminal justice and began a relationship with Braiden’s father.

While most residents arrive at St. Martin de Porres House of Hope following intensive treatment at a rehabilitation center, Amanda’s public defender and probation officer released her directly from jail to St. Martin’s. “They figured since I went to treatment once and was successful, I should be able to handle recovery through St. Martin’s programs, where they’d also teach me life skills and structure.”

Amanda is doing the work. Back on an insurance plan that covers her medications, she fully participates not only in the AA/NA meetings and Groups, but in the community of St. Martin de Porres House of Hope. In addition to doing the chores required of all residents, Amanda maintains the St Martin’s plot at the 65th and Woodlawn Community Garden down the block, growing tomatoes, zucchini and broccoli for residents to enjoy at evening meals. “It’s how I keep my spirits up,” Amanda says.