Through her early 20s, Katrina had it all. Raised in a loving home by her grandparents, she graduated Robert Morris College with an associate degree in business, had a baby boy and got a good job working for the city.

“I was making money, and in my late 20s I started partying,” Katrina recalls. “It was fun in the beginning. I enjoyed the lifestyle. Since I was working and making my own money, nothing bothered me. Partying felt like the thing you were supposed to do.”

“At first, cocaine was a social thing. I didn’t know it was a problem. I had my first apartment, but soon I was unable to pay my bills, and moved back in with my grandmother.”

Katrina left her job and worked for a time with a temp agency doing clerical jobs. But her addiction progressed.

“I had to have more,” Katrina says. “The addiction got greedy, and I started hanging out with people in the streets and I became one of them for about 25 years.”

Nine years ago, Katrina’s grandmother was murdered, and Katrina began to seek treatment for her addiction. Determined to quit living on the streets, she was in and out of treatment facilities for several years. After missing an opportunity for Section 8 housing because she was too high to make the appointment, Katrina realized she had to make a change. She went to Loretto Hospital to seek help, and she remained there for 10 days. She was released from Loretto Hospital to St. Martin de Porres House of Hope.

I came to St. Martin de Porres House of Hope, and that’s when I learned a whole new way of life. I started loving myself more. I realized that getting high was not where it’s at.

“The staff at St. Martin showed us love. Having the curfew and the group sessions made me learn more and more about myself and the people around me. You have to be back in the house at 4:00pm, which is the time that stuff on the streets starts happening. The group sessions were excellent. You learn about other people and other addicts as well, and you find out that you are not the only one out there who struggles. They also teach you coping skills and how to act with people. Some of the staff have been where I was, and they have overcome.”

Katrina moved out of St. Martin de Porres House of Hope and into a studio apartment that her case manager helped her find. Now she has a job with Safe Passages doing community watch at Marquette and Ingleside.

“You get a lot of blessings being clean and sober. St. Martin means what it says – ‘House of Hope.’ There is hope in yourself. St. Martin teaches you that.” 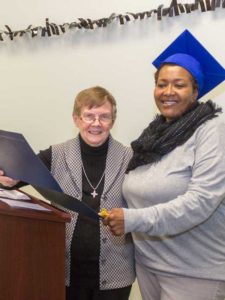 I came to St. Martin de Porres House of Hope, and that’s when I learned a whole new way of life. I started loving myself more. I realized that getting high was not where it’s at.