The Healing Power of Vulnerability 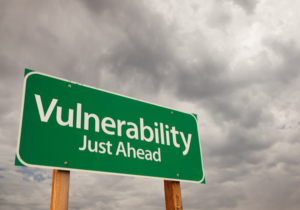 Much has been written recently about the power and value of vulnerability and what vital a part it plays in having and developing healthy relationships with ourselves, with others, with the universe, and with our Higher Power.

The dictionary definition of vulnerable is “susceptible to physical or emotional attack or harm;  open to criticism or wounding.” However, there is no possibility of connection or an emotionally intimate relationship without vulnerability, openness, and honesty. It takes courage and caring to be able to put ourselves in this dangerous, possibly painful, place. We must care enough for ourselves to dare opening in order to give and receive the gift of knowing and being known: the necessary element for growth, healing and connection.

We commonly view vulnerability as a “weakness.” An honest revelation of our feelings puts us in a dangerous place of letting down our defenses, of opening ourselves to the possibility of attack and hurt, of being undefended. If we reveal ourselves and are honest about our feelings we might feel we are giving someone the power to come crashing in we are exposed and defenseless.

A recent experience with two of our residents demonstrated the power that this willingness to be vulnerable has in defusing a conflict. There was a situation that had been brewing for several days, gathering energy and escalating into loud anger. Each woman was defensive, righteous, and determined to “win” – to prove the other wrong. Each needed to justify their position and actions.

After exchanging complaints and accusations for several minutes, with voices getting louder and defenses growing stronger, one of the women paused, took a breath, and quietly spoke about the fact that she was hurt. She was willing to admit feeling dismissed and abandoned by the other, who she thought was her friend. She was brave and courageous enough to be honest, to be vulnerable, to speak her scary truth, to open herself for possible ridicule and more hurt in acknowledging she that was defending and “getting back” at the other for excluding her.

The energy between the two completely shifted. The air that held the anger completely dissipated, the volume in their voices dropped. Their exchanges slowed, and the conversation became about their hurt feelings and mistaken assumptions. It was then possible to have a conversation about how each recognized they had moved into their habitual reaction of defense, but now, rather than holding that position, wanted to clear the air and connection between them.

The scary possibility, and the part of the exchange that is courageous, is that there is no certainty the other person will respond to your truth and vulnerability with their truth and vulnerability. All one can do is offer the opportunity and possibility of untangling the conflict and reestablishing the connection with honest, revealing dialogue.