The Connection Between PTSD and Addiction 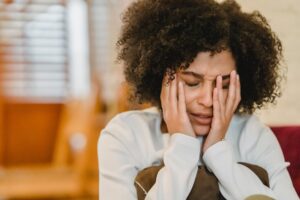 Around 50{a7e53bf5b43edd19b7670ea92f60613c7d437491b188f406ef4afc790707d52c} of individuals seeking substance use treatment also meet the criteria for Post-traumatic Stress Disorder (PTSD), and individuals with co-occurring PTSD and Substance Use Disorder diagnosis tend to have poorer treatment outcomes than those without such comorbidity, according to the American Psychiatric Association.

Some women experience addiction before developing PTSD while others become addicted to drugs and/or alcohol as a way of coping with PTSD symptoms. No matter the circumstance, it is undeniable that addiction and PTSD are correlated.

Up to 70{a7e53bf5b43edd19b7670ea92f60613c7d437491b188f406ef4afc790707d52c} of the population has experienced a traumatic event over their lifetime but only about 8{a7e53bf5b43edd19b7670ea92f60613c7d437491b188f406ef4afc790707d52c} go on to develop PTSD. PTSD is classified as a type of psychiatric disorder. It typically occurs after someone experiences or witnesses a traumatic event. PTSD may occur shortly after the trauma or sometimes not until years later, according to the Anxiety and Depression Association of America. Symptoms of PTSD may include intrusive thoughts, avoidance, negative changes in thinking and mood, and changes in physical and emotional reactions.

PTSD Can Lead To Addiction

According to the National Center of PTSD, about 8 out of 100 Americans will suffer from PTSD in their lifetime. PTSD impacts individuals both mentally and emotionally. It can cause anxiety, flashbacks, and night terrors which could negatively affect day-to-day functioning.

For individuals struggling with PTSD, drugs and alcohol are sometimes used to provide temporary relief from these painful symptoms. In an attempt to self-medicate, many people with PTSD also abuse substances.

Addiction Can Create An Environment For PTSD to Develop

For others, PTSD may be caused by traumatic experiences that happen as a result of living with an active addiction. People who abuse opiates and cocaine report higher rates of exposure to trauma than users of other substances. Living with Substance Use Disorder puts women at risk of severe physical and psychological trauma. Women with chronic addiction issues may experience homelessness, physical and/or sexual violence, and mental abuse which can lead to the development of PTSD.

People of all ages and genders are at risk for developing PTSD if they experience trauma but when compared to men, women are more susceptible to this condition. For women experiencing PTSD and struggling with addiction, moving forward can be difficult but with proper treatment recovery is possible.