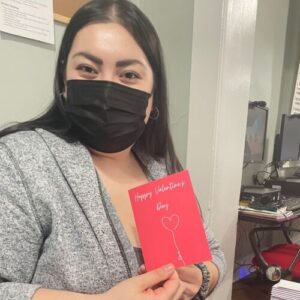 A lover of music, theater and animals, Jazmin was a very involved student growing up. She played saxophone in the band, had parts in plays and did tap, jazz, ballet and hip-hop dancing. Her 5-year goal is to get her own apartment, build a better relationship with her family and secure work that makes her happy. Long-term, she wants to travel the world, hoping to visit the 7 Wonders of the World or fix up a van and drive cross-country. Without the Southside Center of Hope, Jazmin says, “these dreams didn’t seem possible.”

At 28 years old, this is Jazmin’s first time in a treatment facility for addiction. After starting to use in her mid-20’s, Jazmin fell to the disease of addiction and lost sight of her goals. “I was in a place where things weren’t getting worse, and they weren’t getting better,” and she felt lost and helpless. Having wanted to stop for more than a year, her parents finally confronted her and helped her get the wakeup call and treatment she needed. After in-treatment at the Haymarket Center, Jazmin decided to seek further support from Southside Center of Hope after being referred by her counselor, who is a center alumnus.

Jazmin has now been with us for just over six months and is in Phase II of our program, which requires her to start looking for work. With experience as a vet technician and having previously completed 10 out of eighteen months of veterinary technician training at Fox College, she hopes to find a position in a similar field. Having already completed interviews and walkthroughs at both her first and second choice locations, she’s now just waiting to hear back.

Getting a job would mean “another sense of purpose, independence and confidence” for Jazmin. Before coming to Southside Center of Hope, Jazmin was unemployed for about a year and a half. She describes that period in her life as rock-bottom, where she was unmotivated to do anything and couch surfing back and forth between her friends and parents.

“I had to get out of that ‘this will never happen’ mindset,” Jazmin explains of how she’s accomplished her goals thus far. She’s now committed to attending groups, making use of her new gym membership and not procrastinating on getting things accomplished. Her future and her family are her biggest motivations, leaving her feeling like she has a second chance.