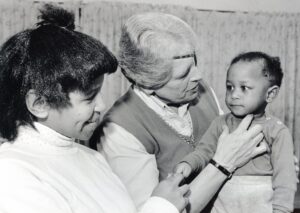 In May of 1983 Sister Connie Driscoll and Sister Therese O’Sullivan, IBVM co-founded Southside Center of Hope (formerly St. Martin de Porres House of Hope). House of Hope began as a homeless shelter for women and their children.

Starting with $15 and 19 beds, Sisters Connie and Therese rehabbed an old drug store building themselves,

After seeing so many women struggle with drug and alcohol addiction, the homeless shelter transitioned into a recovery home in the early 90’s. A new facility was purchased, the old St. Clara school building at 6423 S. Woodlawn Ave., from the Arch Diocese of Chicago for $10.

“Sister Connie and I wanted a place where women could bring their children while they recover in a structured, safe environment that motivates them to achieve sobriety, become gainfully employed and live independently,” Sister Therese said.

Over the years, new programs have been added, community partnerships created, and preschool was added onsite for children.

Thousands of women have been empowered to transform their lives at House of Hope over the last 38 years.

In 2005 Sister Connie passed away at the age of 72. Sister Therese retired in 2016 and named Yaisa Hagood as her successor after working as a development consultant for House of Hope alongside Sister Therese for several years.

While serving as the Executive Director, she has launched new programs, developed new community partnerships, recruited new board members, and developed a financial and technological infrastructure to move the organization towards longt-term sustainability. Ms. Hagood has continued to build on the founders’ by implementing nutrition classes, art therapy, and yoga and meditation classes.

Over the last year, House of Hope has undergone a drastic transition. The agency sold its longtime home in the Woodlawn community and relocated to a new facility.

The school building purchased from the Archdiocese has served as a haven for women and children for more than twenty years, but deferred maintenance and costly building repairs have strained our operating budget for more than a decade.

The new facility represents a new beginning for House of Hope. In the new facility, residents will have private rooms with handicap accessibility. A new facility also means we can apply to be a licensed recovery home, an initiative not achievable at our Woodlawn facility.

As a licensed recovery home, House of Hope will be eligible for additional sources of funding to support our current programming and receive revenue to expand our services. The board of directors and the staff are confident that the organization is on a path to ensuring the mission Sister Therese and the late Sister Connie started in the 80’s will continue for many years to come.